Peter took me to an art class. I can't paint or draw, but it was fun to see what the others created. He explained to me some of the techniques of drawing, but I didn't quite understand. Peter is so much different than his father. It's hard to believe that he and Eddie are related. 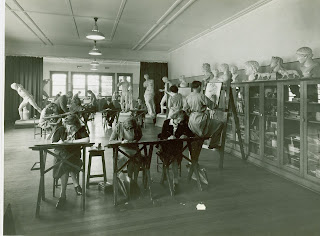 Photo from Gordon Institute of TAFE
Afterward, we went to a little cafe nearby. It is a cafe that a lot of the local art students patronize. Peter really opened up about his father and his life growing up. Eddie has always been in big business, taking him away from home quite often. While on one business trip, Peter's mother went out to run an errand. Peter begged his mother to with her, but she refused. She made him stay at home with his nanny. While she was out, she got into a terrible car accident. They aren't quite sure what happened, but found her car at the bottom of a ravine. After his wife's death, Eddie became very distant. He worked more, and became less of a father. He was always there when Peter needed money, but never there when he needed support and love.
Peter's story made me cry. Despite what he has gone through, he has turned into a caring man.
Email ThisBlogThis!Share to TwitterShare to FacebookShare to Pinterest
Labels: ruby's life