Wake Me Up Before You Go-Go

How exciting is an entire post dedicated to an alarm clock? To me, it is quite exciting, especially when clocks are an important part of our lives. The alarm clock I had been using was a modern battery operated Big Ben clock that was inspired by the 1930s Big Ben clocks. It served me well over the years, but I had always wanted to replace it with something that was actually period. But since it worked, I couldn't justify getting a new clock.

Then one morning I woke up a half an hour late and realized that my alarm never went off. This had happened several times before, but I also questioned if I had just forgot to turn the alarm on. This time, however, I distinctly remembered that I had set the alarm. So, that day I set out to find a new old one.

It wasn't an easy task. Most of the alarm clocks for sale were from the 1960s and 1970s. I was looking for something from the 1950s or 1940s. I honestly didn't know what to look for, though. I had no idea about the evolution of clocks. To make matters worse, prices were pretty high. I even saw a 1990s digital radio alarm clock, the kind that are pretty common at thrift stores, for $30. Most clocks $30 and under didn't work. When shipping is added to the price, it can get a little expensive.

I did a little research so I knew what I was looking for. I found two great sites. One listed all the Telechron clocks over the decades, and the other listed the Westclox line including Big Ben. I picked out a few that I liked, and searched for those particular models. In the Telechron models, I looked for the Troubadour, and the Dispatcher. In the Westclox, I looked for the 1948 Electric. I actually do have a Moonbeam that I got from my great uncle when he passed away, but that stopped working years ago as well.  In my search, I also discovered that my kitchen Telechron clock, the Buffet, is a little older than I had originally thought.

The next obstacle was finding one that was in good cosmetic condition. As you can imagine finding a Bakelite or plastic clock without cracks isn't easy.  Most clocks, even metal ones, really look like they have been thrown across the room. Most clocks, as mentioned, were out of my price range. Then I found one that I really liked, but was outbid with just one second left in the auction. That frustrated me and I thought all hope was lost. A couple days later I found the clock that I ended up purchasing. It was on the high end of my price range, but I am extremely happy with it.

It is a 1948 Electric Westclox Big Ben dating from late 1948 to 1952. It runs remarkably quiet, even quieter than the modern clock it was replacing. There isn't a ticking noise, but a very soft, barely audible sound of the motor. It keeps great time so far. The hands are softly illuminated, which is nice for me so that I can tell what time it is when my upstairs neighbor wakes me up in the middle of the night. There are two options on the alarm - soft and loud. I used the alarm for the first time this morning. I set it on loud since I wear earplugs to bed. I wanted to make sure that it woke me. I was in the middle of a dream when it went off, and the loud quite startled me. Tonight I think I will put it on soft.

I was so excited to use it, that I haven't taken the time to clean it up yet. There is a small crack on the front, but it isn't very noticeable unless looking for it. So, though alarm clocks don't seem like something to create a whole post on, I was so excited, I just had to share. 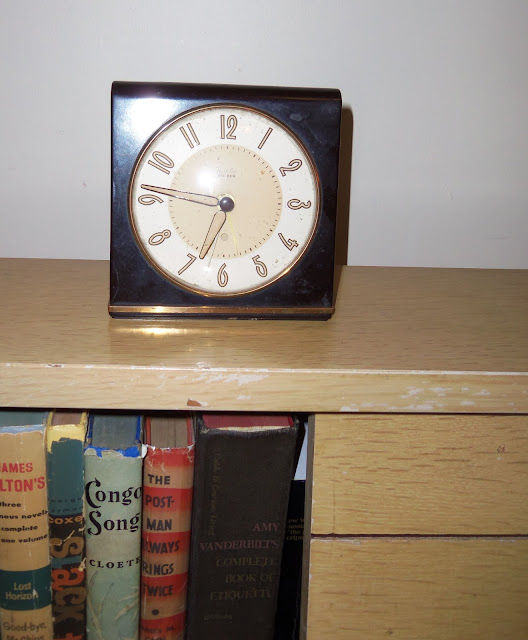 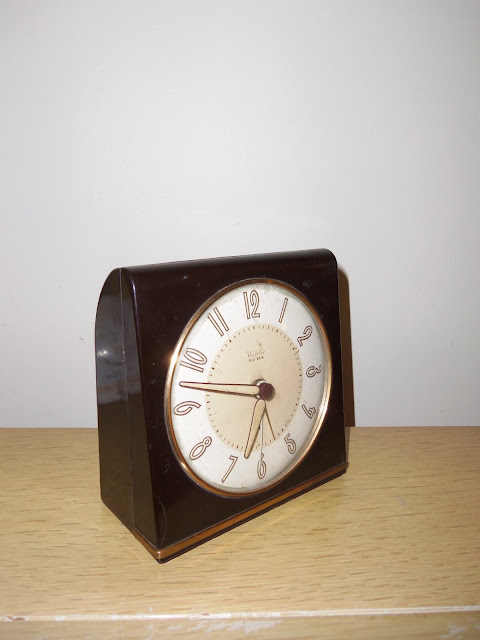