Oh! Diary! I had a fabulous time last night! It was the grandest gayest party I have ever been to. Almost everyone who works at the McCoy Agency was there. Helen and Lois were not there, but Grace and Betty were. Grace approached me as I was talking to Betty. She wanted to apologize for how the other two girls were treating me. She told me that they were jealous that Mr. Fisher was giving me so much attention. Grace said she just went along with them because they were her friends. But, she has felt bad this entire week. We made plans to go to lunch next week. Things are really starting to look up. At least I will have one friendly face in the office.

The food at the party was the yummiest. There was a live band and dancing. I danced with Mr. Fisher a couple of times, but other gentlemen asked me to dance too. I felt like I was really living! I even got to drink a little.

Mr. Fisher has a beautiful home. I have never seen anything quite like it. It is not a mansion, but it is much bigger than most homes. It is in a well to do part of town; a part of town I have never been to. His home is the most modern on the block. It really looks like a work of art. He told me that he had it designed so that the interior of the home could blend well with the outside. I think he accomplished this well.

He asked me to dinner next week. I accepted. I am quite nervous though. He is so well to do, and I have nothing. I don't even have a proper dinner dress. I hope he won't think any less of me. I will have to ask the girls if I can borrow something again. Someday I will have a closet full of stuff to wear. 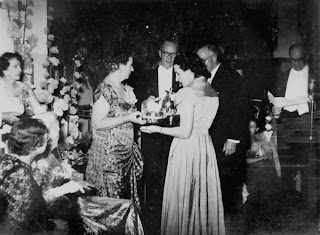 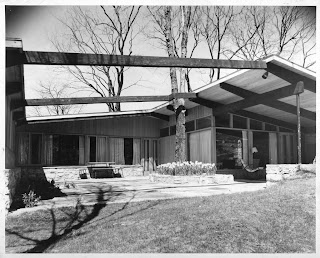