Finding Heaven in an Attic

As promised many posts ago, I'd like to share some stuff that I bought from an old house. Several months ago a friend of mine let me know that one of his coworker's mother passed away. She had kept things for decades, rarely throwing anything away. The family was looking to get rid of some of it. So, one day he drove me out to that house. It was a dream come true for me. (Going through decades of stuff, not that someone pass away. I know that sentence sounded a little morbid.) I was only able to go through a portion of the space, but the section I was in was all from the late 40s and early 50s. As it was I pulled out two tubs worth of goods. They sold it to me as a lot, all the while saying I can't believe you want that.

I more than wanted it. I couldn't contain my excitement. All in all I think I paid a very fair price, even getting a deal. I wish I could have had more time and more money to go through the entire house. But, I am happy with the things I bought.

There are several things that just aren't that photogenic. So, I will tell you about them instead. I got a Dazey Delux can opener that hangs on the wall. It has a red handle, and though my kitchen is yellow, I still hung it on my wall proudly. I got a couple kitchen utensils, also red handled. A local Sunday newspaper from 1954 sits on my coffee table. In this haul there were loads of fabric; wools, cottons, swiss dot, seersucker, and a few sewing patterns. I also got so many magazines, so many in fact, I had to stop looking at the magazines available. Many of these publications were scanned and uploaded onto Tumblr. There was a box full of random clothes that were taken apart, I assume to make into other items. For example, there was a ripped and stained dress bodice missing the skirt. But, in that box I found the cutest play suit with shorts and a blouse that fit me. The blouse was beyond repair. The shorts were stained, but passable. I plan to use the outfit for a pattern. I also found two chenille blankets, though slightly damaged, I am still using them on my bed.

Now for the things that were photogenic. I'll save the best for last. If you follow me on Instagram, you have already seen most of the thing listed above, and the things listed below. So, just bare with me. 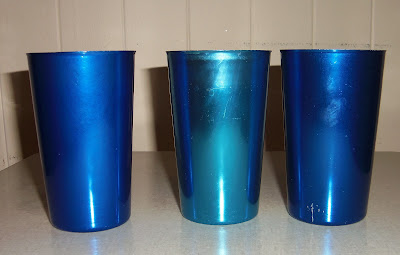 First up are three blue aluminum tumblers. Yes, one has a little scratch on the bottom, but the other two are in good condition. 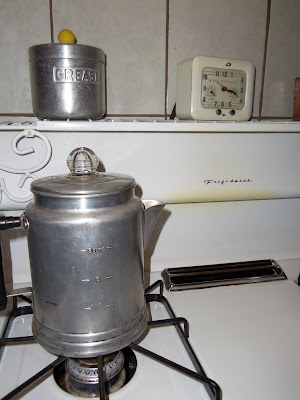 A percolator which sits nicely on my stove. Though I don't drink coffee, I've always wanted one. 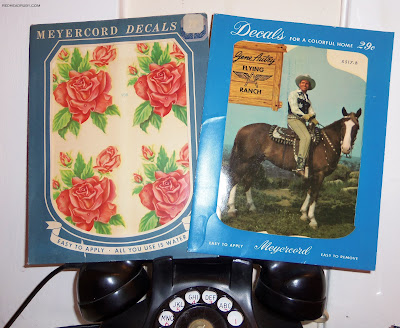 Rose and Gene Autry decals. I'm not quite sure where I'm going to put these yet. 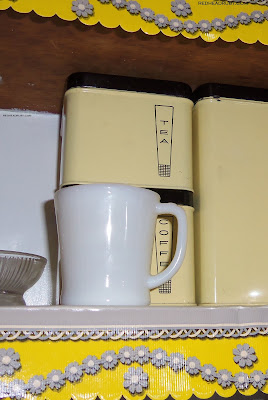 Five Fire King white mugs from the late 1940s. This was another item I was super excited about. I had been looking to find some vintage mugs, but couldn't find ones that I really liked. Though these are plain, they fit nicely in my cabinet. 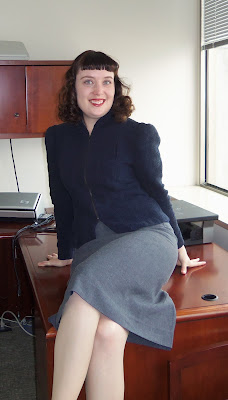 Seeing how damaged the other clothes in the box were, I kept looking at this jacket trying to figure out what was damaged on it. Even when I got home, I looked it over, but couldn't find anything wrong with it. It also fits me perfectly. I am not sure if you can tell from the photo, but it is a navy blue nubby wool fabric. I could not find any tags inside, but the zipper is a Talon brand with an interesting logo design. Also, please excuse the background. There just aren't any pretty areas to take pictures at work.

And, now for the finale. Are you ready for this?? Are you sure?? 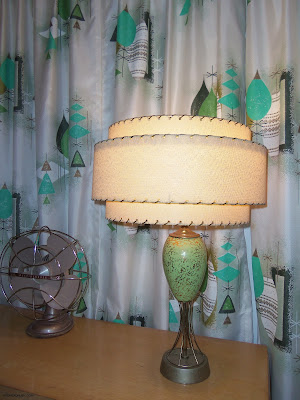 I LOVE this lamp. I didn't actually bring this home that day. My friend had gotten it from his coworker a couple weeks before I made the trip. He gave it to me. It has to be the best present I've ever received. The color matches my green bedroom. It looks fantastic on my blonde wood dresser. It has the original fiberglass shade. It is also a three way light. So, I have my choice of varying degrees of illumination. Pretty fantastic, huh?