I have been trying almost every day to do pin curls so that I can improve. I'm having a hard time getting my hair smooth. Most often I have a sort of dent in my hair before the curls start. And, sometimes the curls aren't really round, but kind of square. But, I keep trying.

This next set I tried was picked out by Tony Curtis (with a little help from Janet Leigh). It is the headliner (pun) for the section "...hairstyles for the young married." Now, I probably wouldn't be considered  young by 1957 standards, and I am not married, but I thought I'd try it anyway. The hair in the photo is a bit shorter than mine, and the bangs are a bit longer. So, my hair turned out slightly different (actually my hair turned out very similar to all the other settings I've done without instructions).

I don't usually set my bangs, but thought I'd play along with the instructions. It called for "a row of barrel curls for the bangs." Since my bangs are too short to curl in a barrel row - or stand up curl - I decided to use 5/8" perm rods. Though one fell out, and I had to fight some hair that was sticking straight up, I actually rather liked the outcome.

The rest of the instructions were a little vague, especially for a newbie. It states to set the hair in "a halo of pin curls, loosely set, for the sides and back..." Well, I don't know how to loosely set my hair with out it falling out. So, I set it normally, which is probably much tighter than they meant. The diagram shows a column of three pin curls on top of the ear, and four in the next column. The back has two rows of pin curls, which I didn't do the exact amount (the diagram shows five).

I was actually surprised that I got somewhat close to the picture of the final product. I think that once I figure out how to smooth out my hair toward the crown, that my settings will look a lot better. 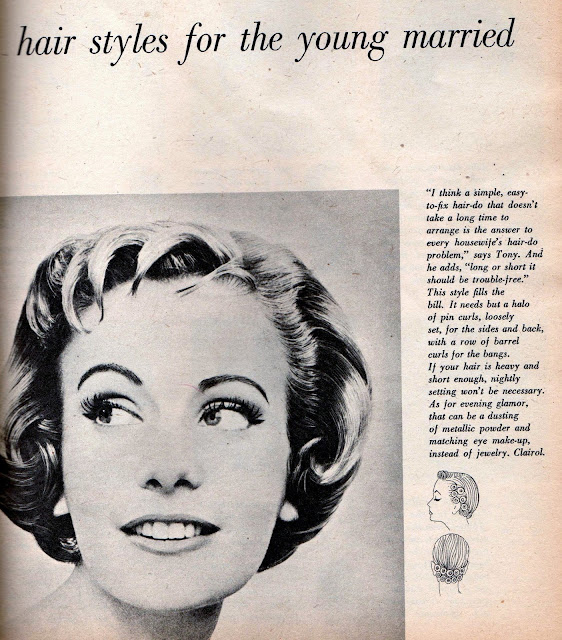 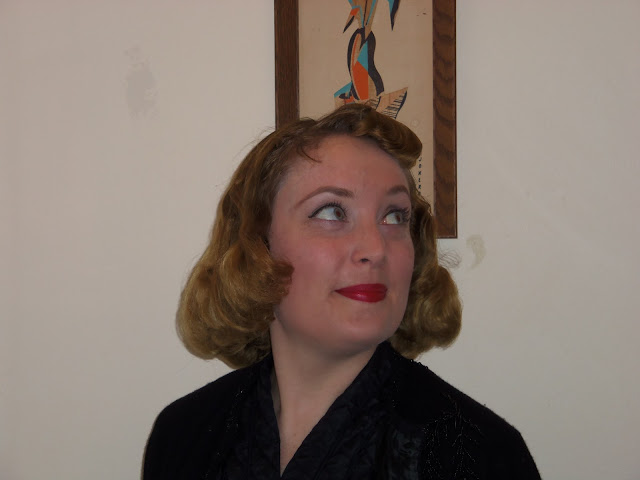