While I was sick a couple weeks ago, I had time to watch a lot of documentaries. One that I found interesting was the story of Brownie Wise. Not only was she responsible for building the Tupperware empire, but she was a very fashionable lady. As I watched it, I envied not only her business sense, but her sense of style.

Brownie was born in 1913. As an adult, she found herself alone raising a young son during a time when women had limited options for employment. Even those who did door to door sales were men. But, she needed to feed her child. One day a salesman came to her door. She was not impressed with his pitch, and thought she could do better. She started working for Stanley Home Products, and made a name for herself. Eventually, she was introduced to Mr. Tupper. She liked his product, but thought that his way of promoting it could be improved. She suggested that he pull all of his products out of the stores, and sell these items only through home parties.  Her marketing strategies were so successful, that she made Tupperware a household name. She was also the first women to be featured on the cover of Business Week.

These home parties worked, because most women of that day stayed at home while their husbands were the bread winners. Many women did not have use of the family car, and were stuck at home caring for their children. With the sales parties, women were able to socialize with their friends and neighbors while making a little bit of extra money. Soon, though, Brownie's relationship with Mr. Tupper took a turn, and she was ousted from the company. She left with very little of the empire she had help create. 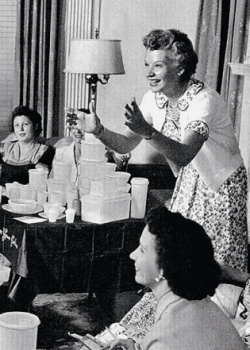 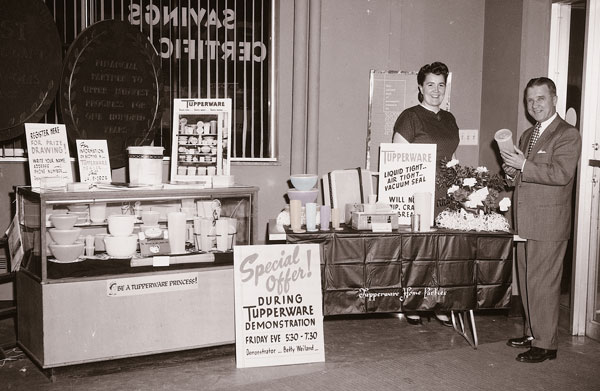 To watch the documentary, and to see Brownie's style,  look for the show on the PBS website.
Email ThisBlogThis!Share to TwitterShare to FacebookShare to Pinterest
Labels: interesting women