My Second Day at Noir City

I went to my second day of the Noir City festival on Wednesday night. Despite getting there a half an hour early, we still had to sit in the balcony. I am really surprised at how crowded it has been this year. I have never seen it so full, and have never had to sit in the balcony. I have mixed feelings. Party of me wants to be selfish and not have so many people come. But, it really is a good thing. It is good that more and more people are becoming noir fans. It is good that this festival is drawing such a crowd, because with more money going to the Film Noir Foundation, the more they can restore films. So, I shouldn't feel so selfish.

Last night I did stay to see both films. The second one I had seen once before, but not on the screen. The theme for the night was San Francisco. The first film was The Sniper. It came out in 1952. The film is about a serial killer, which at the time there were very few. The main character, Eddie Miller, knows what he is doing is wrong, but cannot stop himself - though he wants to get caught. I enjoyed the film for the most part. I thought the ending was not quite up to par with many noirs, though. Afterward, there was a short from Reel SF (in the links to the right) showing what the spots in the film look like now. I always enjoy the hard work and sleuthing that is done for this site.

The second film was Experiment in Terror from 1962 starring Glenn Ford, Lee Remick, Stephanie Powers, and Ross Martin. Though not technically a noir, it was a highly enjoyable film when I saw it the first time. This time, however, there were so many people making so much noise in response to the film that I could not hear some of the lines. Despite that, it was still great to see it on the screen. This film is about a man who threatens to kill the woman he is psychologically terrorizing and her sister, in order to get $100,000 from the bank which she works. There were a ton of great scenes including the final scene shot at Candlestick Park. Again, Reel SF provided a short film with many of the locations in modern time.

I tried to take photos of the theater, but it was so dark. They just didn't turn out. I also didn't smile for any of the photos I had taken of me to show my outfit. I think it is because I had the event photographer stop me to take some photos. The first photo he took, I smiled. He asked me not to in subsequent photos. He said it would keep with the noir vibe. I guess I got a little paranoid, and stop smiling in the photos that my friend took. Actually, the honest truth, is I've been feeling rather self conscious lately. I want to find different ways to pose, but with so many people around, it is hard to relax. Someday I will practice that. But, in the meantime, here are the non smiling photos. 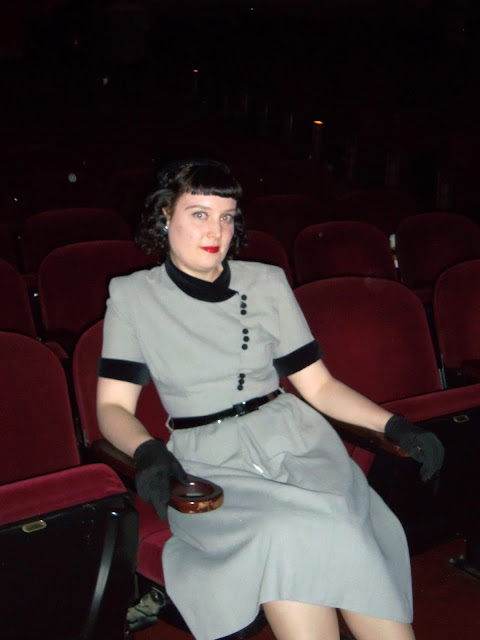 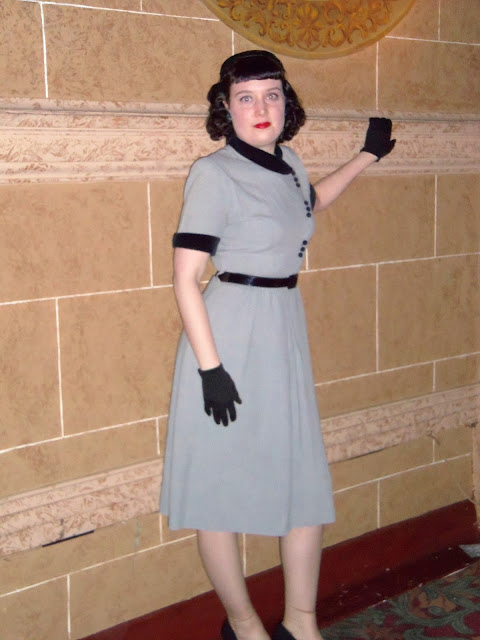 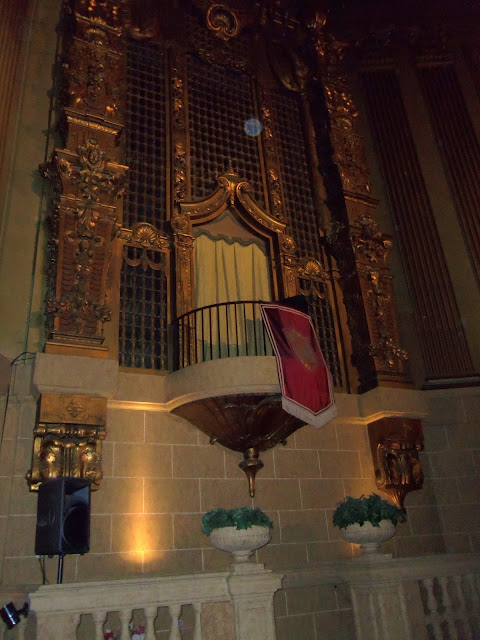 This was the only shot of the theater that didn't turn out too dark.